My Solution for Political Ads

This really has nothing to do with real estate but I only have one blog…and it does prove that I’m a problem solver, which is what you really want in a Realtor, right?

Is anyone else as excited as me to not see political ads for another year or two?! I mean, does anyone really listen to these? And if they do, should they really have the right to vote in the first place?? The fact that _____(insert politician here)_____ voted a certain way on a bill does not mean that he is going to maime your toddler…or that your 112 year old grandmother is going to be abducted by aliens. The ads are ridiculous and have nothing to do with what the candidates have planned to help us but what the other candidate may or may not have done “wrong”. How is that supposed to inspire a nation, state, or city? Without getting into politics directly, I’ll get to the point. I have a thought and want someone (a politician, of course) to try it. I don’t care who it is but I will vote for them.

Instead of spending their money on these goofy ads to bash others, give the money to charity. It would stop annoying everybody and their mother and more importantly, it would actually put their campaign funds to good use.

So, in my political utopia, here’s an example of how we would make a decision for a politician: 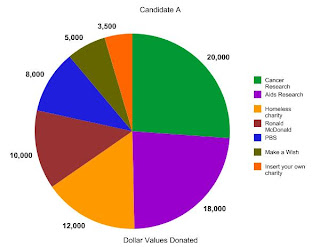 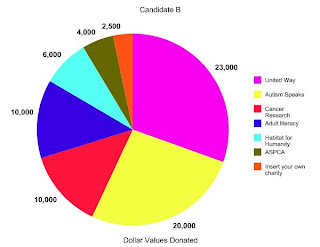 And now, we get to make an educated decision based on what the candidate believes IN giving their hard earned money to…AND they’re benefiting society instead of annoying it. I think more people might actually vote that way.

Let’s face it. Most people don’t even watch commercials anymore so the money spent is pretty wasteful. So why not try it? A lot of people aren’t up to speed on the issues that they’re voting on and if each candidate just put together a website and send out mailers directing us to look at them, maybe we would. America is online, after all.

If you agree, click the little button below to re-tweet, re-post, or forward to your friends via e-mail. Let’s make a stand, damnit!!

This entry was posted in elections, political ads. Bookmark the permalink.

One Response to My Solution for Political Ads