August home sales in central Ohio were higher than the previous month and the average sale price of a home sold continues to rise.

There were 1,605 homes sold in August which is 8.2 percent more homes sold than during the month of July. Home sales during the first eight months of the year are now 9.2 percent higher than the same period in 2009.

“We saw a lull in housing activity after the tax credit expired which was not surprising given the frenzy of activity attributed to the generous tax credits for both first time and repeat buyers earlier this year,” said Sue Lusk-Gleich, President of the Columbus Board of REALTORS®. “This upswing in sales is a positive sign that our central Ohio housing market continues to strengthen.”

There were 3,700 homes listed for sale last month bringing the total number of homes for sale in central Ohio to nearly 17,000 which is 16,5 percent more homes than were on the market at the end of last summer. 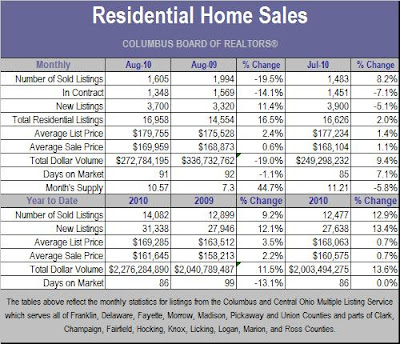 Source: Columbus Board of REALTORS®

This entry was posted in Columbus home sales statistics. Bookmark the permalink.