It’s the first of the month! Which means I’ve been analyzing figures from the MLS on what’s currently on the market, in contract, and sold. Not surprisingly, all of the numbers did go down (which, unfortunately coincides with the number of times my cell phone rang). As all of the media outlets from around the country have been reporting today, the sky is falling. Truly, this isn’t anything to be surprised about (most people in the industry expected a lag after the tax credit deadline passed us by). Anyway, here’s what the numbers look like for Columbus.

If you’re unsure of what any of the lingo means and/or want to compare the numbers, check out last months blog

Homes currently on the market took over a 12% dive from last month. It’s good this figure decreased but in order for demand to catch up with supply that number is going to have to drop quite a bit more. I attribute a lot of the decrease to sellers who were “testing” the market while the tax credit was still active and have pulled their listings since it expired…anyone else wanting to jump on that bandwagon won’t hear me complain. All categories dropped by between 11-13% except for the $500K, where there was only a 7% decrease. 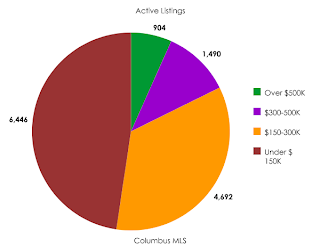 Homes going into contract reduced by nearly 35%. The biggest hit price bracket in this category was the $150-300K range, which went down by 39%, whereas the other home price categories saw around a 32% decrease. I think this has something to do with the overlap in price range (many first time buyers purchase homes above $150K as well as the number of first time sellers who sold and moved into this price range). When the tax credit ended, the remaining buyers who missed out and still purchased may have padded last months numbers. 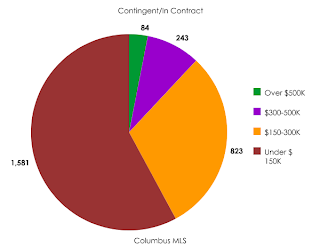 Solds went down by just under 15%, which tells me that there are a lot less procrastinators out there than I thought…and/or some of the deals that were supposed to be closing fell through or have been extended (I bet those Buyers are pretty stoked about the last minute extension to the closing date, which was just passed by the Senate) 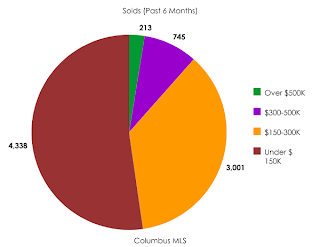 Only time will tell what this means for us. It stands to reason that the numbers will stay down for awhile. The tax credit did invoke a lot of would be Summer buyers to buy before the April 30th deadline. But people are still buying and the numbers won’t take near that type of hit again anytime soon. Either way, I realize it doesn’t help Buyer confidence but I believe it was Warren Buffet who said the time to invest is when no one else is (because you don’t make money off of what’s popular). If you’re able to, now is the time to buy a rental or investment property (before interest rates go up…unless of course you have cash and then you might want to wait until then). Oh and just to disclose-these numbers change by the minute. This is a snapshot of what was going on at 1 o’clock this afternoon.

This entry was posted in Columbus home sales statistics, Statistics. Bookmark the permalink.